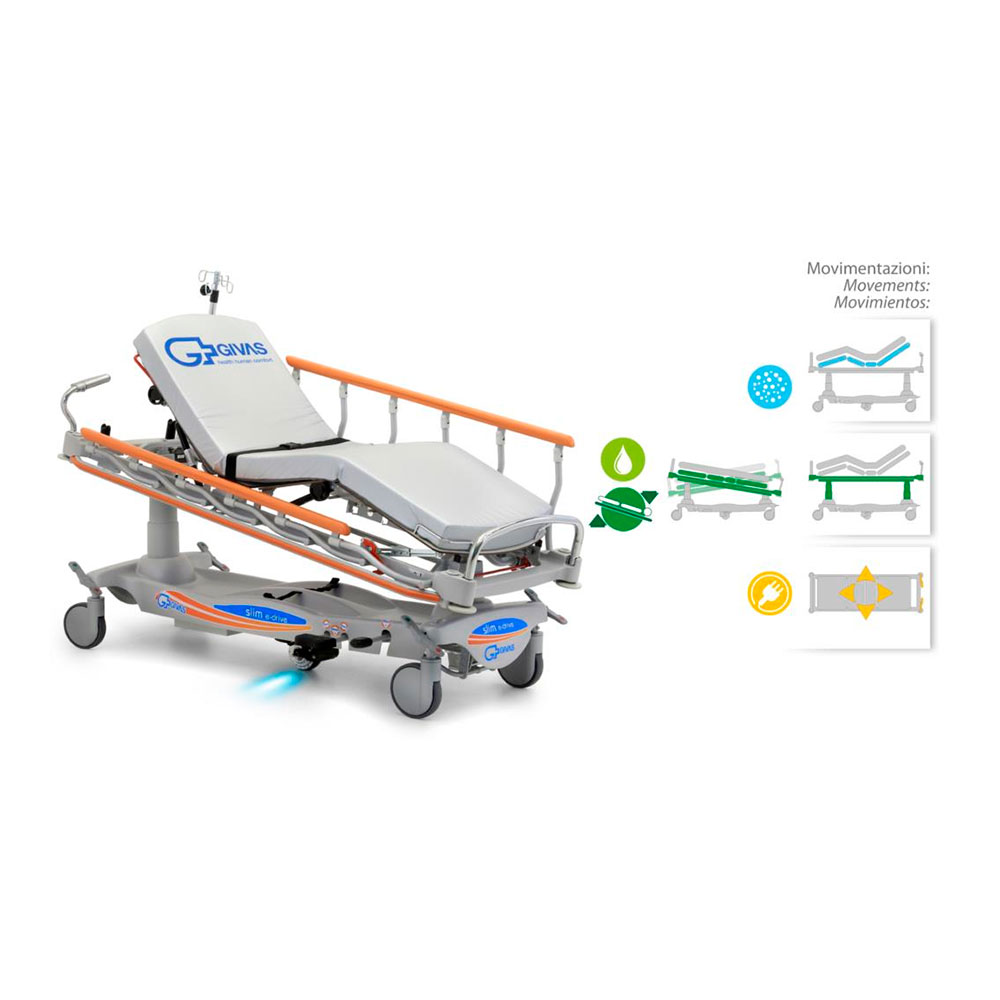 Transport of patients on trolleys represents a common practice, especially in emergency wards and, consequently, it turns to be the main cause of serious risk of injuries to healthcare professionals who usually have to carry out innatural movements timely, sometimes uphill as well.

The new slim stretchers with e-drive system have been specifically studied to be used by just one operator ensuring, thanks to the 5th motorized wheel and to the push-touch only, no effort for forward-backward and lateral movements, for an easier transport in total safety and simplicity.

The 5th motorized pivoting electric wheel of the e-drive system has a diameter of 145 mm and a dampening system that bypasses any inaccessible obstacles along the hospital routes.

The e-drive technology inside the push handles allows the wheel to be operated only during the gripping and pushing phases (forward and backward); in proportion to the push intensity applied, the acceleration or deceleration speed will increase. When the push force is released, the system provides a gradual autonomous braking force.

The motorized wheel of the e-drive system can rotate 90° on the right and on the left to facilitate lateral movements. In addition, the particular shape of the bumper bars, associated to the adjustable height of the lying surface and the absence of lateral protrusions, allow the full alignment of the stretcher to the main hospital and diagnostic devices, minimizing the difficulty of the patient's transfer.

The complete absence of structural elements between the lying surface and the x-ray cassette has allowed the insertion of chromed runners (standard) along the entire longitudinal area of the stretcher. In this way it is possible to carry out x-rays along the entire lenght of patient's boby, avoiding patient's movement during most critical situations.

The movements and the wide dimensions of the lying surface (both with 2 and 4 sections) offer a high comfort both during intervention phases and patient's long stay.

Thanks to the telescopic columns placed on both ends of the stretcher, there is a wide free area below the lying surface that allows the insertion of the image intensifier from both sides.

A particular attention has been dedicated to the study and use of innovative systems for the height adjustment through the two columns, and for the elements of the load-bearing plane, making thus health workers' activity notably easier.

WLF Ltd. is a business service company, supplier and distributor of hospital furniture and medical devices.

We provide in Bulgaria products from leading Italian manufacturers of medical equipment for hospitals, clinics and laboratories. Highest quality and reliability of the products guarantee our customers perfect investment efficiency.

Complex supplies of medical equipment and furniture to hospitals and private clinics. Sale of medical furniture.